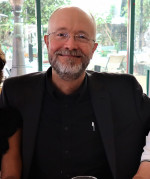 James Arthur Bond is an associate professor of English at California Lutheran University, where he has directed two interdisciplinary programs and taught courses that connect the arts and humanities to other disciplines. A former assistant professor of English and director of the American Studies program at Valparaiso University, he earned his M.A. and Ph.D. degrees from Indiana University Bloomington, where he was awarded the William Riley Parker Teaching Award. Dr. Bond has considerable expertise in the areas of writing theory and pedagogy, American literature and periodicals, literacy and print culture studies, and English education. He is also a trained musician, and has drawn extensively from that background in both his teaching and research. His early scholarship focused on the literacy practices fostered by prominent nineteenth- and early twentieth-century periodicals, including the Century Magazine, Scribner's Magazine, McClure’s, and the Strand. More recently he has been exploring the interdisciplinary and interpretive contexts of the music of composer Morten Lauridsen. Based on extensive interviews with the composer and a careful reading of his manuscripts, papers, and scores, the project has yielded two articles for the Choral Journal—the first of which illuminates O Magnum Mysterium by tracing the influence of a seventeenth-century painting on the composing process. A second article, published in the September 2022 Choral Journal, interprets the composer’s anthem I Will Lift Up Mine Eyes (1970), in relation to Old Testament theology. A third article will trace the genesis of Morten Lauridsen’s Prayer, a plaintive setting of Dana Gioia’s poem of remembrance and hope. All three articles along with other work will form the core of chapters of the book Dr. Bond is writing on the composer's music and life.