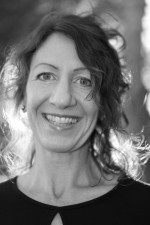 She teaches writing and literature courses in the English department and in the University Honor's Program, and teaches yoga as an Activities course.

She is founder and director of the Guest Writers Series, and founding faculty advisor of the Write Club. She mentors creative writing minors, and has served as faculty advisor to CLU's literary arts magazine Morning Glory.

Bachelor of Arts Degree in English and Sociology, University of Wisconsin-Eau Claire

"Because My Little Dog", Pleiades: A Journal of New Writing, 2012

“Over the Fluctuating Waves”, the Southern Review,  Fall 2015

"Where There Is No Doctor", The Normal School, 2009 (Nominated for Pushcart Prize)

·       “Participant in the Larger Force: Perception and Presence in the Poems of Donald Revell,” (book chapter), Till One Day the sun Shall Shine More Brightly, Ed. Derek Pollard, University of Michigan Press, 2020

·       Review of Ellen Urbani Hiltebrands’s When I Was Elena, Peace Corps Writers Website, 2006

California Humanities Grant for Voices of the Nation three-part series on US Poet Laureates, 2020-21 https://www.callutheran.edu/community-business/voices-of-the-nation.html